The oiling system is one of the most important parts of an engine.  Yet it is one of the most neglected and misunderstood.....Until a catastrophic failure occurs.  If you are part of the latter then we are sorry for your loss and are here to help make sure it doesn't happen again.  If you are ahead of the curve and addressing your oiling system before failure.  Congratulations!  You have made a great choice.

To understand an oiling system you must first understand what the oiling system is attempting to accomplish.  The oiling system does many things for an engine.  The first purpose oil serves is to separate the internal engine components and prevent metal on metal contact.  Alternatively oil also improves the efficiency and life of an engine.  This is typically done through additives that change the characteristics of oil to improve performance and lengthen engine maintenance intervals.  In performance oil pans it is important to have oil control features to prevent oil starvation.

Despite this being the most popular style of oiling system its shortcomings are apparent in the automotive aftermarket.  The oiling systems job is to provide consistent oil pressure to feed the bearings.  The stock wet sump system commonly fails to accomplish this goal in performance driving situations.  As soon as the pickup becomes uncovered the oil pressure stops and the engine becomes at risk for damage.  The other shortcoming of the wet sump system is also a strength at the OEM level.  Packaging of a wet sump oil system is nice from the factory but can cause problems when aftermarket parts are introduced.  Anything from aftermarket cross members, exhast systems, to swapping engines in cars can create difficulty with the OEM oil pan that was designed for a very narrow application.

The most common swap that is being done now is the LS motor.  With the wide range of vehicles it is being put in, there are commonly very specific dimensional requirements for the oil pan and system.   The LS motor has proven potent and reasonably swap-able due to its power output and tight packaging.  Commonly the oil pan is the biggest hurdle to dropping the engine in.  The other common issue we see is with aftermarket ford front ends.  Commonly the front portion of a 302 or 351W pan will hit the new cross member.  We commonly get requests to have the front section shallowed up.  However, the front of both the 302 and 351W house the oil pump which can't be moved in a traditional wet sump.  The solution to that problem is simply to move the engine either forward or backward in order to clear or go with a Dry Sump or Single Stage Wet Sump 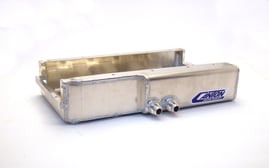 tanks are designed to control the oil and are typically taller rather than wider to ensure that the oil is being constantly fed to the engine while the car is moving.  The taller design limits the oil from moving side to side.  Baffles are also used to prevent oil from moving upwards.

The next advantage that can maximize a dry system is the packaging.  By using a dry sumps system you are able to use a lower profile pan and lower the center of gravity by mounting the engine lower.  The oil tank can also be moved anywhere on the car to achieve the desired weight distribution.  Dry sump systems are also able to be set up in a custom fashion a lot more simply than a wet sump due to the manufacturing processes of the parts.

The last advantages are all definite advantages but are somewhat secondary to the first two main advantages.  Due to the design of the dry sump system reducing windage is infinitely easier.  Windage is created when the rotating assembly and the oil get too close to each other.  By removing the oil from the oil pan and storing it elsewhere a dry sump system by default reduces windage.  The oil pan however can be designed to remove even more oil from the crank to further reduce windage through the use of a crank scraper.  Another secondary advantage of a dry sump system is the ability to increase the oil capacity easily through the design of the oil tank.  The benefits of additional capacity are well documented in our "Why Engine Oil Matters to You" E-book.  Lastly the dry sump system is also inherently better at reducing crank case pressure created by blow by gases.

The disadvantages of a dry sump system are few but are significant.  The cost and complexity of a dry sump system typically make it unrealistic for most racers and race teams.  The cost to performance difference between a full dry sump or a well designed wet sump and an Accusump™ typically doesn't favor the dry sump.  For teams with cost caps and budgets the choice is usually a fairly easy one to make.  Make no bones about it though a dry sump is still a superior system.

The advantage of this set up is typically fitment within a certain chassis requirement.  Since the pump is

externally mounted now the oil pan can be designed to any dimension without having to worry about oil pump clearance and pickup tube location.  The only caveat to the dimension advantage is that because the oil is still being contained in the oil pan it will still need to be large enough to hold a reasonable amount of oil.

The largest disadvantage of this set up is that you are not gaining any of the advantages afforded by a dry sump but you are increasing the cost and complexity considerably beyond a wet sump system.

If you want to know more about engine oil & what it does click below & get our Engine Oil E-book.