Engine Maintenance Is A Pain

Posted by Jeff Behuniak on Nov 29, 2016 3:12:44 PM
It is common knowledge that engine maintenance is a necessary part of an engine. Maintenance costs money, time and can often lead to costly downtime.  Proper engine maintenance however can prevent premature wear and also improve efficiency over the life of an engine.  With modern technology it is common for standard automotive engines to last well into the 200k mile range and beyond.  A quick browse through the cheap cars listed on craigslist will confirm this.  There are many different things that can affect maintenance intervals for an engine.  The most obvious of those being how the engine is being used.  The three most common applications for engines are Standard Automotive, Marine, & Industrial Use.

1. Standard Automotive
This category is probably the most common.  Each day you see hundreds of cars whether your commuting to work, school or going shopping.  Unless you live in a rich eco-friendly area crawling with Teslas, the vast majority of these cars are powered by a gas or diesel engine. Even the hybrid Prius, uses a traditional style engine in a hybrid configuration in order to charge it's battery power train, but I digress.

The standard automotive engine applications, for the most part, are considered light duty. What this means is that the engines are being operated in fairly optimum circumstances. Most cars travel in the middle of the RPM range with moderate amounts of idling.  With modern cooling systems and this middle range RPM usage the temperature of a car that is not malfunctioning is relatively close to optimal as well.  These factors increase engine life over other types of engine use.

The other distinct advantage that a standard car engine has is that they are generally started daily or close to.  It is a generally accepted notion in the oiling industry that most engine wear happens upon start up.  The longer an engine sits without running the less oil the bearings are going to retain and the less they will be lubricated when turning the engine over again.  This causes pre-mature bearing wear and can reduce the life span and efficiency of an engine. However, since most cars are started daily this can be of minimal concern. The anti-wear additives included in modern oil (zinc dialkyldithiophosphates) allow the oil to hang onto the bearings for longer.  Click here to see our blog on the three types of oiling system set ups used in standard automotive applications. 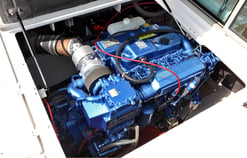 3. Industrial
Industrial use engines should rightfully be broken out into two categories.  Industrial Vehicles & Stand Alone Engines.  Each of these categories are distinctly different in usage when compared to each other and how they need to be maintained.

Industrial Vehicle engines are most similar to standard automotive engines.  Most of

these will still see mid range RPM.  With the distinct differences being that industrial vehicles are typically heavier and more commonly sit at idle.  This differing usage is reflected on the Fleet.Ford.com website as Ford fleet vehicles track hours as well as mileage.  On the site Ford states that one hour of idle equals 25 miles of driving.

Industrial Stand Alone Engines.  These engines are commonly used as generators. Both as main and back up power sources.  Each having distinct service and maintenance 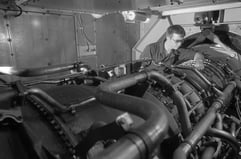 If you are wondering how this information can help you.  Click below to get our E-book that explains where engine oil comes from, what it does and why it matters to you.